For some travellers, this might be a familiar conversation:

“We need find out where the lantern festival is. Can you Google it?”

“What did the front desk say?”

“It may or may not be happening.”

“Are these sky lanterns or water lanterns?”

“How long does it take to get there?”

“The security guard said we should have left three hours ago.”

“Really? The guy I just spoke to said we would be fine leaving at five?

“Really? The lady I spoke to just spoke to said we need tickets.”

“We don’t have tickets.”

“Can someone Google it?” 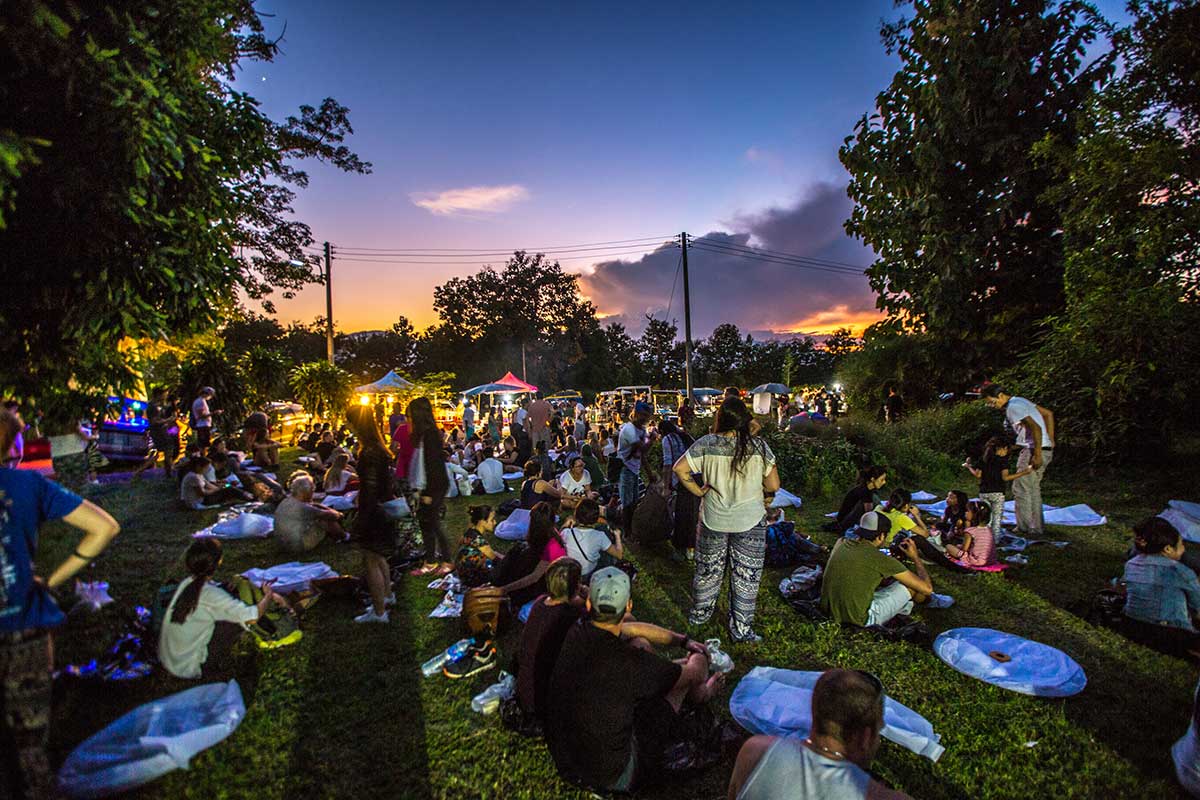 Chiang Mai’s Yi Peng festival is one of the most popular in northern Thailand. (Outpost/John Price)

The Yi Peng festival occurs in Chiang Mai every November. Over three days, revellers honour Buddha during the festival by releasing floating lanterns into the sky. An ancient spiritual tradition, it’s a time for Buddhists to let go of personal demons and negativity and cleanse themselves of past problems and welcome new beginnings.

Because of the King’s passing, however, celebrations of any sort have been subdued, casting doubt on whether the festival was actually happening. The visuals, no doubt, would be spectacular, so naturally, we’d all been chewing at the pad Thai to attend.

As it turned out, the Yi Peng festival was indeed happening, with sky lanterns, at the university, after an hour commute, Colonel Mustard, in the drawing room, with a candle stick.

And we did make it there only find out that, yes, you do need tickets. 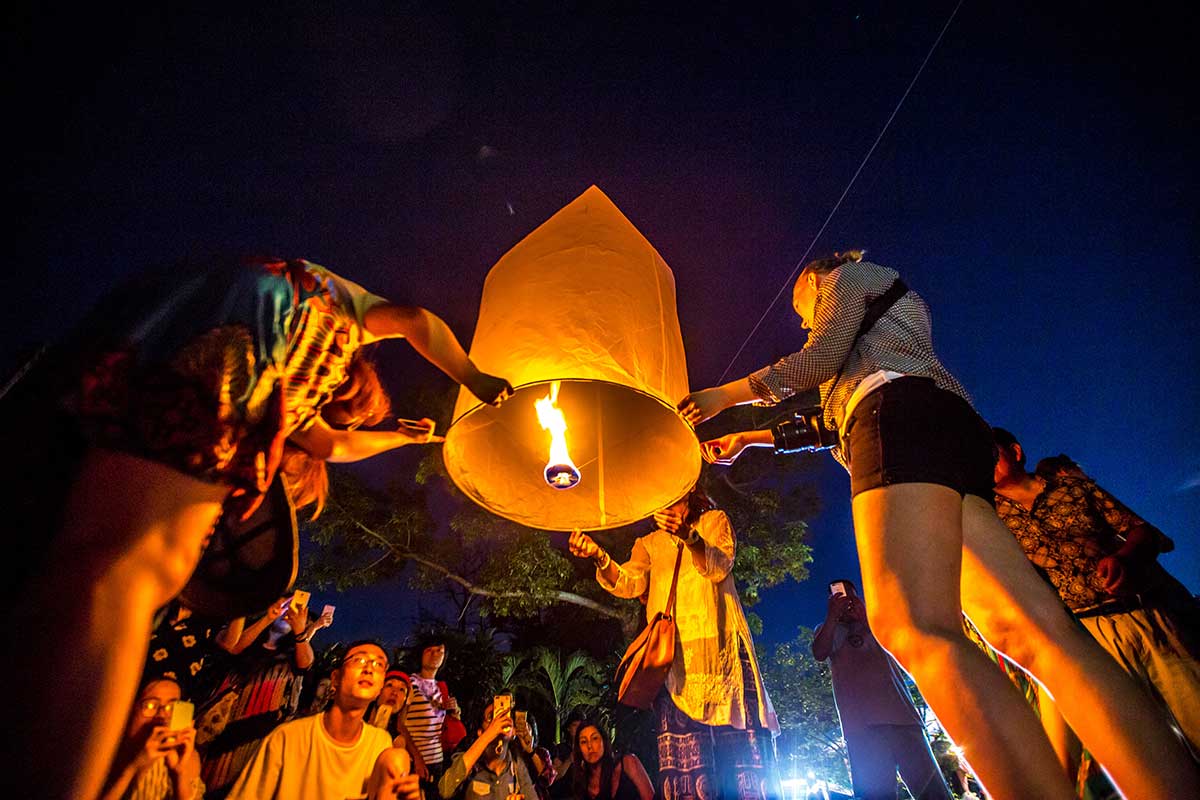 Setting off a lantern at the Yi Peng festival can quickly draw a crowd. (Outpost/John Price)

“Okay, Lena. You’ve got this,” I told myself. “Just go up there and believe you’re going to get in. Be assertive. You are media. You are important. You’re doing them a favour.”

Like a Muay Thai boxer getting oiled up for a match by his handler, the team launched me into the ring. I walked toward the chain-link fence ready to strike, my eyes zeroed in on the woman with an air of import, signified by the line of workers patiently waiting to speak with her.

Like a 16-year-old girl at a Backstreet Boys concert, I leaned over the chain-link fence desperately trying to catch her eye. When I finally Jedi-mind tricked her into looking my way, I pulled out the big guns: remembering that the deeper you bow, the more respect you pay, I bowed to the gatekeeper so low I almost kissed my knees. Hands in prayer, I dropped every piece of ammunition I could: “We’re with Canadian TV. We’re working with Thailand Tourism. I’ll pay you.”

“Ma’am, other media gave us the same story—we still said no. I am so sorry. There are no more tickets.”

“Please. Please! My boss will kill me. My mom is lost inside. I have to pee—no—I have explosive diarrhea!” 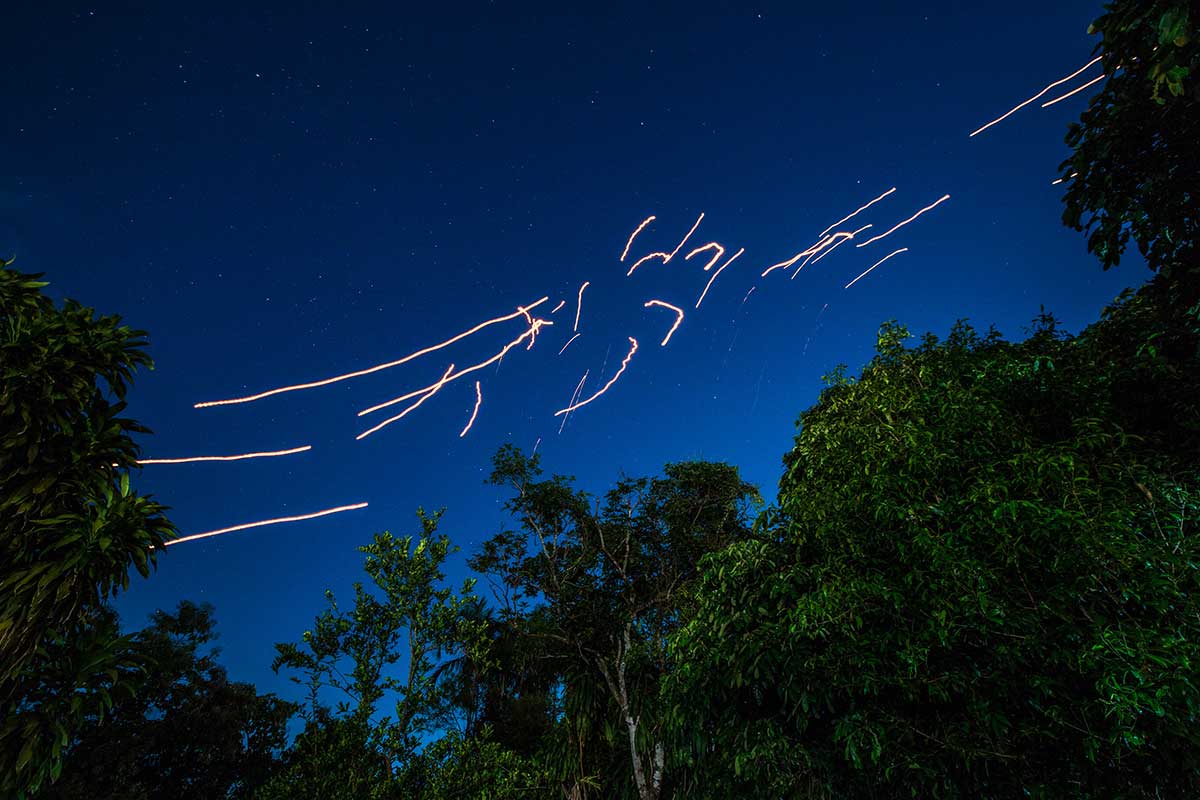 Boss Lady, one; Lena, zero. My head hung with the despair of loss, I returned to the team—but before I did, Boss Lady called after me:

“Ma’am! Ma’am! You can go over there. You will see the lanterns very well!” She pointed to the rows of young Thai backpackers and expats who had arranged themselves into makeshift bleachers on the grass, plebeians who, like us, had neglected to buy their tickets.

We situated ourselves in the muck of it. In the sunset’s afterglow, as we walked over tissue lanterns lying deflated on the ground, we noticed a community forming in the cheap seats as people from different borders and beliefs shared markers and stories, acquired lighters and new friends. 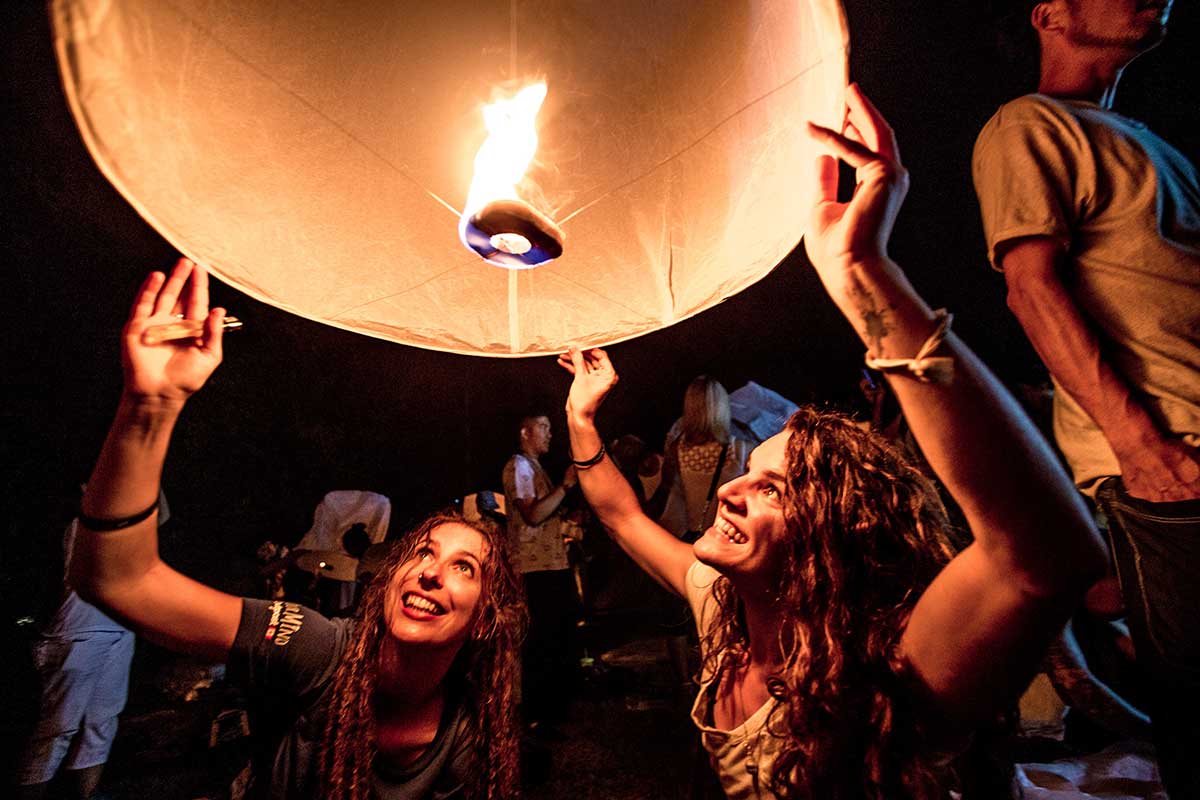 “What are you wishing for?” we asked.

“A good life for my children,” said another.

As dusk dimmed, some lanterns were lit prematurely, and the first wishes took the place of stars as some 10,000 sky lanterns drifted on thermals into the deepening night, a man-made Milky Way splashing across the sky. 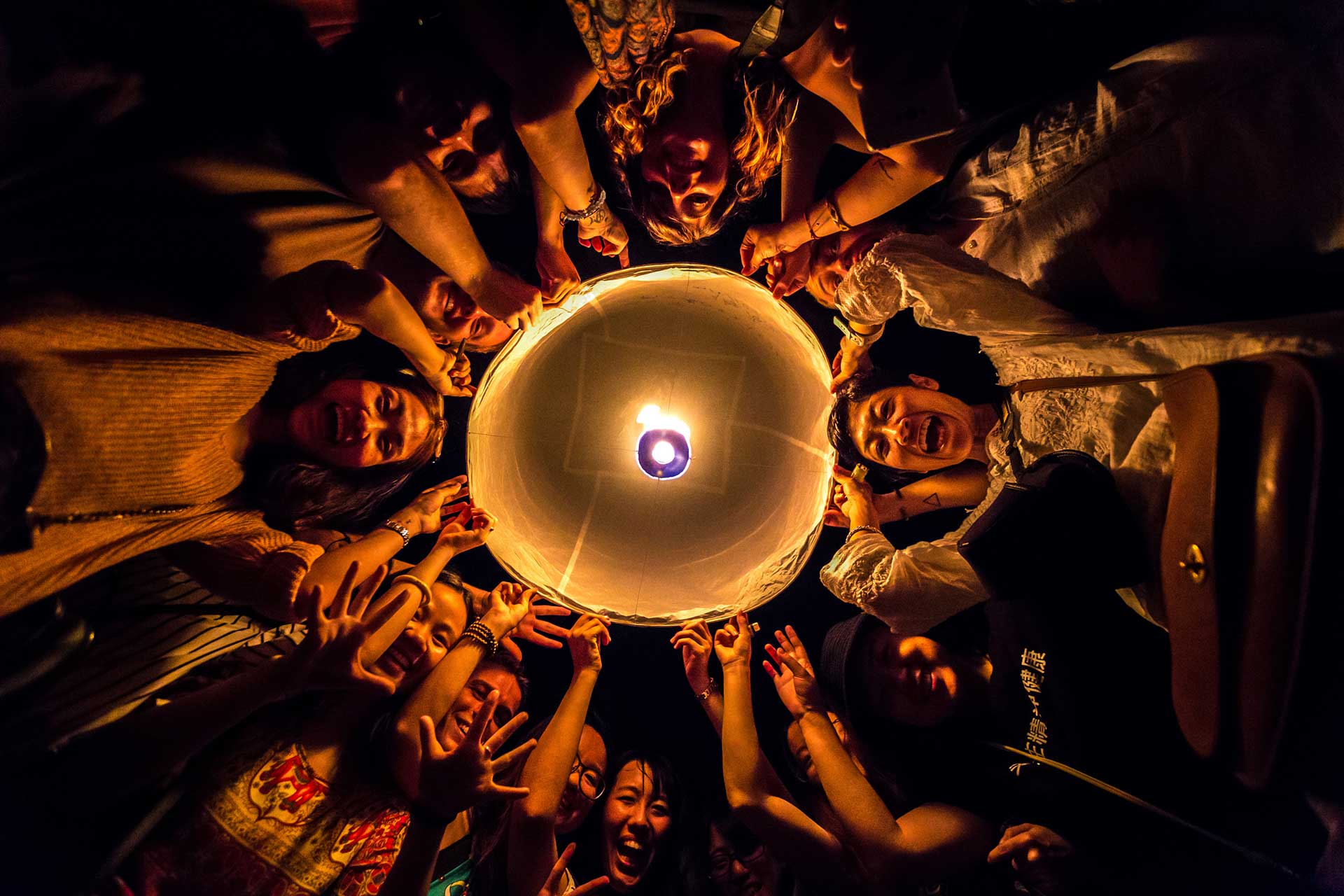 All together, now: Setting off a Yi Peng lantern. (Outpost/John Price)

Down on the ground, we learned no lantern could be lit alone. As we sent our wishes into the heavens, we helped others send off theirs. Holding the brim of a lantern or lending a lighter or a hand, together we wished for something better.

The wishes weren’t profound. No, they were of the essentials: of health, wealth and happiness. Of love and light and longevity. Together, we spouted clichés on clichés on clichés—and we wished for those clichés to come true.

As our eyes twinkled with fire light and our hearts inflated with so much warmth, they too could have sailed sky high; but from somewhere in the crowd, a land urchin lurked, and from the bowels of our new community, there was a blood-curdling scream.

What happened next? Stay tuned for part two, which we’ll post tomorrow! 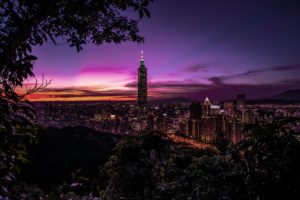 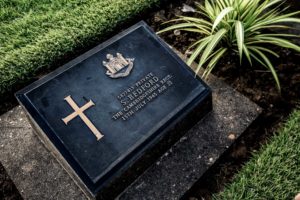 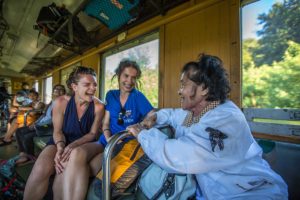 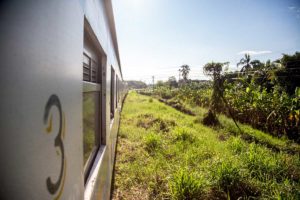 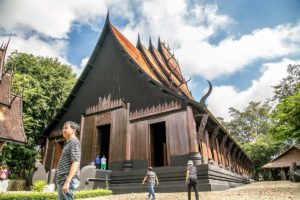