There’s a romantic mystery to expats.

I don’t mean people who’ve relocated for a year to teach English or volunteer at an NGO before applying to grad school. I’m talking about the people who’ve sold their shit and burned their bridges—who often have a shadowy air about them that suggests they didn’t relocate just “because of the weather” as they claim.

There’s typically a push factor. I’ve met expats who’re allegedly on their country’s wanted list on drug charges and even treason, although the latter could be just a rumour sneaking through the hostel restaurant like a street dog yearning for scraps. They remind me of the protagonist in the backpacker classic Shantaram (an awesome read on overnight trains).

Other people are rebounding after being sideswiped by life as though it were a sedan on black ice—a broken marriage, a failed career, a personal tragedy.

Yet most expats seem to simply be misfits in their countries of origin, disagreeing with various Western norms and values like hyper-consumerism, 40-hour work weeks and the American Dream. These individuals are habitually philosophers and make excellent conversationalists, although you might have to buy them a beer first—which is probably “cheaper than water,” as they’ll inform you.

Expats exist in a mezzanine realm: not blithe and ignorant like tourists, but lacking the communal narrative and street cred of locals. While they are frequently very knowledgeable about their new home, the nation’s histories and traditions don’t mean to them what they do to those born there. Language barriers as well as outward appearances can make it challenging to fit in. For this reason, many popular backpacker destinations have strong expat communities.

I imagine being an expat is like hiking along a ridge where you have one foot in each landscape, yet your perception is from an offside viewpoint. For many people, the daunting, years-long (if ever achieved) acclimation is enough to dissuade them from a permanent move regardless of how much they love their host nation.

But I hope to do it one day. In Canada, I admittedly feel like the aforementioned misfit, my values and desires not aligning with the status quo. Visiting Chiang Mai, I imagined myself living in the old city where temples glitter behind 7-Elevens and motorcycles zip through alleyways like mice in a maze; meandering through the flower market just for the smell of it (get it?) and exploring the bizarre ingredients in the food market that look like bits of wood and nest.

Perhaps it’s the Thai concept of sanuk that attracts me to the country—the notion of injecting playfulness and satisfaction into everything you do. Or the encompassing sense of chill often associated with Buddhist nations. Even if I never nail the five different tones or manage driving in downtown Bangkok (not that I ever managed driving in downtown Toronto), I could see myself calling this gorgeous and complexly nuanced country home one day. 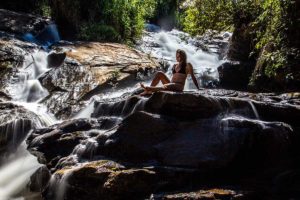 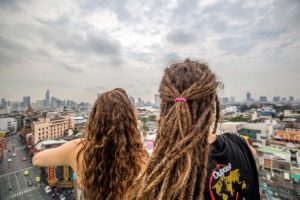